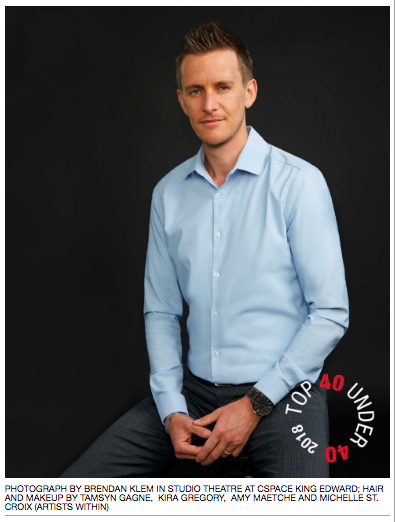 Matt Toohey says he became a “huge energy nerd” while working in the mail room of a Calgary oil-and-gas company and pursuing his first degree, in communications. He leveraged that mailroom gig into nine years as a communication specialist and investor relations analyst with ARC Resources Ltd. Then, the Australian-born Calgarian went to Tanzania, and came back a renewable energy nerd. After an interlude in the U.K. to get his MSc in renewable energy from Newcastle University, he returned to Calgary in 2011. Here, he proceeded to infect others with his passion for sustainability and has helped make TransAlta a nationally recognized sustainability leader in the process.

“There’s still this misconception that sustainability can’t make money, which is very false,” Toohey says. “It can, and we know it can.” In fact, Toohey is so sure of this fact that he was able to convince the TransAlta executive team and board to accept his target of reducing the company’s CO2 emissions by 19.7 million tonnes by 2030. This move gives the corporation a specific goal and essentially a carbon budget. The company has also aligned its target with the UN Sustainable Development Goals, which aim to reduce global warming by two degrees.

How Sustainability Pays Off

Under Toohey’s leadership, TransAlta became the first Alberta company to include sustainability disclosure with its financial reports, presenting its environmental, social and economic achievements and impacts to its shareholders. TransAlta has been added to the Leadership Index in Canada and recognized by the CDP (formerly the Carbon Disclosure Project) as an industry leader on climate management and received the silver level PAR (Progressive Aboriginal Relations) designation from the Canadian Council for Aboriginal Business.

How He’s Changing the World

“We can’t change everything all at once; that’s overwhelming,” says Toohey. “But we can look at where we can contribute effectively and choose our focus. As a business that is an emitter of greenhouse gases, we can ask ourselves: what can we do here? And then, we can innovate and create a product that reduces the negative effects of what we do and still drives the economy forward.”

That’s what he’s doing at TransAlta — encouraging out-of-box thinking at the grassroots and C-suite level and “leading sustainability across a global organization in a complex and very disruptive industry.” Or, as he calls it, “chipping away” at sustainable change. —Marzena Czarnecka