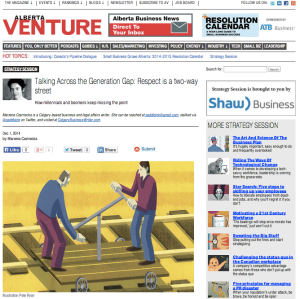 For the December 2014 Strategy Session (Alberta Venture), I reconvene with John Piercy, Group Vice-President at Business with Shaw Communications, and bring on-board Rob Henderson, President and CEO of yconic, to try to effect a workplace entente between Boomers and Millennials. Tell us how we did, will you?

Full text at Alberta Venture: Talking Across the Generation Gap: Respect is a Two-Way Street

Strategy Session: Talking Across the Generation Gap: Parent-Child dynamics in the workplace / Respect: it’s a two-way street. How Millennials and Boomers keep on missing the point

He’s just come back from touring the Facebook “campus” in Menlo Park, California, and John Piercy, Group Vice-President at Business with Shaw Communications, is blown away. “I was by far the oldest guy there, and I was definitely the most overdressed guy there—and ok, I’m from Calgary, I was not that well-dressed, in jeans and a T-shirt, right?” he says. It was 9:30 in the morning, and the campus was… NOT pulsing with energy. “My tour guide apologized—it was early, most people don’t start work until 11 or so. There are more people there at 9 at night than at 9 in the morning. But that’s the way their people want to work, and so that’s the way they work.”

The overall feeling, Piercy says, was of a concentrated—but “authentic”—effort to blur the lines between “work and personal.” People are given not just permission but the tools with which to spray paint the walls (and do—some artistically, some not so much). There are on-campus restaurants so you don’t have to leave to eat. Oh, and they’ll do your laundry, so you don’t have chores pulling you home.

“It’s a fascinating environment,” he says. “A lot of work gets done. It’s counterintuitive to the way we do things—where we have work hours and play hours, and there is some expectation that you work during play hours.” On the Facebook campus, you play… and work… and play… frequently, at the same time. “The Millennials, they multitask way more than any generation we’ve ever seen,” Piercy continues. “They can carry a conversation on with someone else while sending a text and watching content. Facebook—any employer who wants to harness them—has to enable that. Millennials don’t wait for the 2 o’clock meeting to tell you what they’re working on what they need. Everything is real time and instantaneous, and they have their cell phones and tablets in front of them the whole time they’re doing anything.”

Like… anything. “The tour guide said, don’t get offended if everyone’s got their laptops open while we’re talking in our meeting—we’re conducting the meeting, but we’re also keeping other business going.”

So. As you can tell, Piercy’s in awe—slightly out of his comfort zone—but also, excited, and wondering, first, how a company like Shaw can apply Facebook’s strategies—innate to Facebook given its lifespan and age of its founder—in-house (“We’re quite lucky,” Piercy says. “Our CEO is more Millennial than of my generation.”). And, just as critically—what Shaw needs to do with its business offerings to help its clients support its growing Millennial workforce. (Sometime between 2017 and 2020, they’re going to be half your workforce. Ready?)

Underscoring Piercy’s approach to figuring out what Millennials need and how to give it to them—in the name of the greater corporate good, if you want to be cynical about it, but after all, we’re all in the game to make a profit, right?—is something very powerful and personal. See, he’s a Dad. To two Millennial daughters he loves. When he looks at what they’re doing, what they’re seeking, what approaches to career-life-love-the-universe-and-everything they’re taking—he doesn’t always understand them. Sometimes, it’s kind of alien, like when his youngest daughter chooses to work a noon to eight shift, and take two mid-week days off (“I would have been appalled to have a job like that,” he says. “But she loves it—that’s what she wanted. She chose those hours.”). But see—I’m going to say it again and I want you to really, really listen—he loves them, and so he watches, and learns, and tries to understand. He doesn’t dis an entire generation’s workplace potential because its experience of, and relationship with, technology, the workday, the employer (and the universe) is different from his own.

He respects them. Sees their immense potential and is looking for ways to enable it—harness it—accelerate it. Them being both his daughters—and the Millennial workforce of Shaw and its clients.

Did you catch that word? Respect? Just as too often it’s something that’s missing from parent-child interactions when children reach that age, it’s something that’s too often missing from Millennial-Boomer interactions in the workplace. (And we, Gen X’ers, sandwiched, squeezed, and made virtually culturally irrelevant between two demographic bulges, just sigh, shake our heads in quiet despair, and soldier on…)

The lack of respect and lack of understanding between Millennials and Boomers is the issue that multi-generational organizations need to solve if they want functioning, creative, productive workplaces. As Rob Henderson, President and CEO of yconic, puts it, “There is a gap in verbiage. When Boomers talk about Millennials, they call them entitled. But when Boomers were acting the way an ‘entitled’ Millennial does—and they did, and do—they would use the word ambitious to describe themselves.”

Ha. What do you think about that? Where you entitled in your 20s? Or ambitious? Shh—hold it. You’re getting defensive on me. You were ambitious, but they’re entitled. Let’s work on that framing. Henderson tells a story about an intern (a Millennial) asking for more responsibility. He was capable of more, he could see he could contribute more. Could he? The human resources manager (a boomer) freaked. “The response essentially was, ‘How dare he,’” Henderson says. The result? An unleveraged employee, who’s going to be gone, soon. And perhaps leveraged by a competitor who will, in response to, “Can I do more?” say, “Hell, yeah. Here. Run.”

Here’s the difference between Millennials and Boomers: access to information and connectivity. A thwarted Boomer could bitch about his boss and workplace to his drinking buddies. A thwarted Millennial can tell the world, and the world will respond. Immediately. With similar stories—potential solutions—other opportunities. Add to that the demographics that mean more people are retiring/dying than are entering the workforce, particularly in certain high-demand trades and professions (encourage your kids to get trades tickets, babes, not LLBs or BComms), and the power in this generation, really, lies with the employees.

You need them more than they need you. And it’s not accommodation when they’re on the cusp of becoming the majority of your workforce.

So here’s today’s take-away, and it’s shockingly simple. Don’t treat your Millennial workforce like crap. Don’t disrespect or dismiss them. Communicate with them the way they want to be communicated with—and here’s the big secret—teach them how to communicate with you.

I’m going to skip over the obvious, because every tech mag and HR consultant out there is full of advice on how to be where the Millennials are, how to craft authentic (ugh, we’ll do things to that word together in 2015) messages that reach them, etc. etc. I’ll just get Henderson to underscore the most critical aspect of the obvious: “This is a generation that appreciates and needs immediate feedback. They need feedback every day, on every project—not once a year in a performance review.” (More on performance reviews that work in 2015, too. Can you wait?)

Here’s the thing no one’s talking about that you need to start doing as part of your on-boarding/training program: face the generation communication gap head on. Like… talk about it and train your people on it. Teach your Millennials what the Boomers’ issues are (there are so many. Where to start…) and how they can most effectively communicate with their old school supervisors. Teach your Boomers how to turn “entitled” into “ambitious”—how to understand, harness and leverage the potential of the Millennials’ “different,” instead of trying to shove it into a twentieth century pigeon-hole.

Don’t know where to start? How about with this: “We are a multi-generational workplace, and proud of it. The diverse nature of our workforce presents certain challenges. We have different communication styles and different values and beliefs about work, play, career, parenthood, ambition, aspiration, life. We treat each other and our different values with respect.”

It’s not HR pap, babe. D’you know how to keep your teenager from hating you, moving out, and ruining her and possibly your life by doing stupid things? Yeah. Don’t be a dick. Listen to her. Understand instead of judging. Facilitate, encourage. Make things possible, not onerous.

Do the same in the workplace.

What? You’re a terrible parent and you hate your kids? Well. Then I can’t help you. Sorry.

Marzena Czarnecka is a Calgary-based business and legal affairs writer. She can be reached at paddleink@gmail.com, @paddleink on Twitter, and visited at CalgaryBusinessWriter.com and NothingByTheBook.com.